The Structure of Argentine Tango
Part 1: The Basic Structure

In this article we will learn about the basic structure of Argentine Tango. In very simple terms, most tangos consist of the following elements:

The basic structure of a simple Argentine Tango consists of 5 sections. Some people like to describe this structure as ABAB and others say that it is ABABC, meaning that often the last section often has a little different structure than the previous A sections. Often, in this final section there will be some sort of instrumental solo. But there is nothing guaranteed. Sometimes sections are longer or shorter or have little intros to the sections. This is just a general structure to listen for and the really important thing for dancers is to hear wihen these sections are coming to an end and when a new one begins.

A Sections (or Verses)
I like to think of the A sections as verses. In popular music, this would correspond to the lyric of the song and a singer would sing all three verses. In tango, the first verse is almost always an instrumental. The second verse, is either an instrumental or sung depending on the orchestras use of a singer. The third verse, is often an instrumental with a solo, but it is occasionally sung.

B Sections (or Chorus / Refrain)
The B section is usually repeated twice and will be the same both musically and lyrically. Once again, the first chorus is not sung in most tangos, for dancing. If the song is not an instrumental, the second chorus is almost always sung, but of course there are variations. The chorus usually has a more upbeat and more rhythmic feel than verse, but not always.

Dancer's Note: This structure helps us as dancers, if we pay attention to the first verse and the first chorus, then we will know, within reason, what to expect for the rest of the song.

Now let's listen to two famous tangos, "Bahía Blanca" by Carlos Di Sarli from 1957 and "Pensalo Bien" by Juan D'Arienzo with Alberto Echagüe singing from 1938, and see if we can hear this structure. 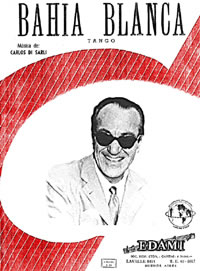 "Bahía Blanca" is an homage to Carlos Di Sarli's hometown, which is located in the south-west province of Buenos Aires. It is a great example of an elegant, sophisticated tango.

Next, let's listen to the 5 sections independently of each other. 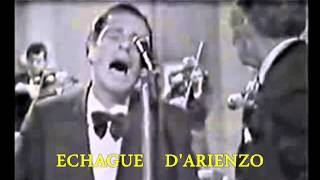 Next, let's listen to the 5 sections independently of each other:

The first difference that we might notice is small, but each verse begins with a slight 2 second intro played only by the bandoneon. Another noticeable difference here is that Alberto Echagüe sings the second chorus. Echagüe is playing the common role of the tango singer as an "estribillista" or chorus singer.

In the vast majority of tango songs, played for dancing, the singer will only sing a small portion of the lyric. Usually they will only begin singing during the second verse and/or the second chorus. This helps us as dancer's, because we get to hear a whole verse and chorus without singing, so that we can hear the musical structure before the singing starts. For more on the singer's role in the tango orchestra read my article: The Role of the Tango Orchestra Singer.

Tempo
One difference to notice between these two songs is the tempo. Tempo is the overall pace (beats per minute) of a piece of music. Both songs have the same amount of beats, but "Bahía Blanca" is 2:52 while "Pensalo Bien" is 2:18. What is different is the beats per minute. "Bahía Blanca" is played at approximately 56 bpm and "Pensalo Bien" is played at approximately 67 bpm. When I say beat, I am referring to the "walking beat" (aka downbeat or strong beat), which I will explain more in a moment.

Dancer's Notes: Tempo has a lot to do with our style of dancing. Below are some examples of how we might modify our dance depending on tempo. Notice that I keep using the word "might" as these are general ideas and not absolutes. We might do exactly the same steps in both, but the quality that we give to those steps might be very different.

Here are two demos from our classes that show very similar steps performed to "Bahia Blanca" and "Pensalo Bien" which should show some of the different qualities mentioned above.